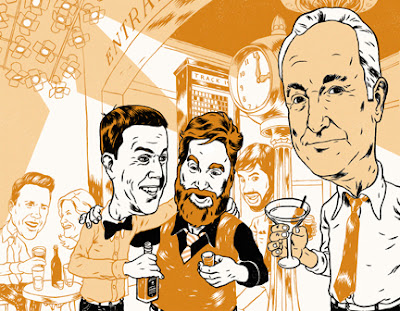 For the super nice Scott Dvorin at the New York Observer chronicling the SNL cast party, after party, after after party . . . It's a fun challenge to do a portrait compilation especially in the quick turnaround time frame.
Posted by Andrew DeGraff at 9:49 AM 2 comments:

History of the World Press!

Whee!   Owen and I got a nice write up in the Times Union about our "History of the World" show which we awesome.  We were even referred to as "drawing nerds", which may just be my new job title.   Plus I thought I'd throw in another (sick of History of the World posts?  I hope not . . .) piece from the show I'm finally getting the time to tile together from the scans I have.  Here's my Ronald Reagan, a companion piece with Owen's Maggie Thatcher.

Posted by Andrew DeGraff at 11:36 AM No comments: 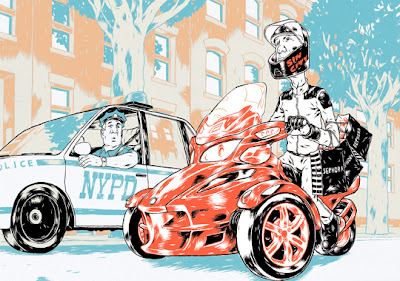 Here's a new piece for Scott Dvorin at the New York Observer about a drug ring based out of the Park Slope.  These geniuses had their main dealer driving around on a red Can-Am Spyder tryke with heroin in Sephora bags or some other highly conspicuous vehicle tossing drugs into cars . . . super low key, fellas.  How ever were you found out?
Posted by Andrew DeGraff at 3:01 PM No comments: 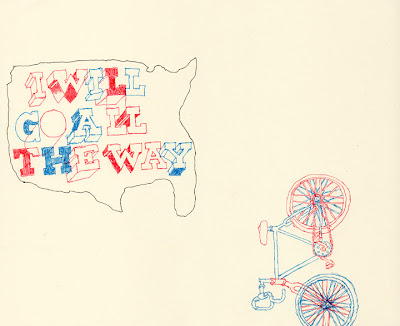 I have this dream of riding across the country form NY to LA and making a book of drawings, and I'm starting to think that next summer may be my last chance to do it.  I need to find a grant.
Posted by Andrew DeGraff at 1:33 PM 1 comment:

This is a portrait of my brother - the former cutest kid on earth title holder, and inspired by the fact that I don't remember myself being two, but I remember thinking of Nate as four.  I think when you're a younger sibling you live vicariously through your older sib until the age of 22.

This piece is a depiction of the Earth on it's two hundredth birthday.   Originally I was going to place more type on it for the full "Bicentennial" poster effect, but decided on just a small little call out.  There Earth was still pretty much a muss back then - a clump of rocks finding it's way.  A little terrestrial toddler.  I thought Legos would suit it nicely.  AND - nice that this guy got into American Illustration. :)
This turned out to be a lot of fun.  We decided to each paint a boat - the "HMS Boatheart" and the "USS Fudgecicle" respectively, and then frame ridiculous little drawings of "cannonballs" - really anything you would throw at someone else - and then left a note for people to tack up their own canonballs.  Let me tell you - it's hilarious.  There's stinky socks, flower bombs (an actual flower with note telling you it's a flower bomb), visual puzzles, an oscillating fan . . . It's everything I could have hoped for and more. 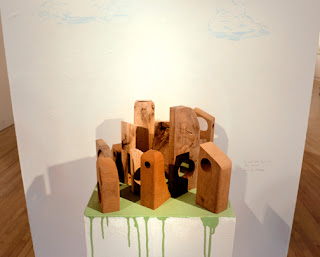 These are Owen's "Primordial Action Figures" which are both pretty and funny.  They totally take on little characters in my head.  He makes these from the scraps of some really beautiful wood from his job, and brings them home for his daughter, Mae.  These ones are special for the show.


Just a little reminder from me to you.:) 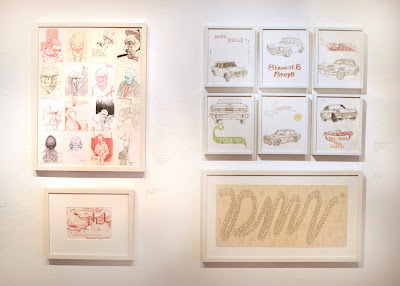 The right is a collection of Owen's subway drawings from London.  Top left is this collection of drawing about his mid-life crisis when he buys a sweet car and goes and hangs out at Stewart's all day.  Below that is my beloved "DMV".


What a dishonorable fate for the dinosaurs in a way - to end up plastic dinosaurs, that actually machines that transform into plastic people shaped robots.  Even thought most fossil fuel is not really dinosaurs, some of it is, making petroleum based plastic dinosaurs a little disturbing.

I've been wanting to do a periodic table for a while, and thought it could work with the show theme.  And yes, all the elements are there. 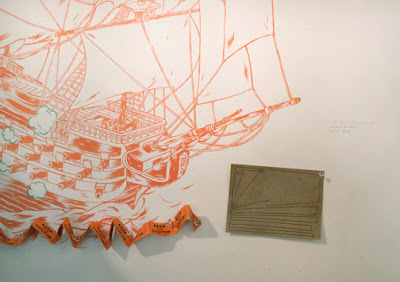 A close up of the canonball battle that got pretty experimental - love the color of those tickets and the craft paper! 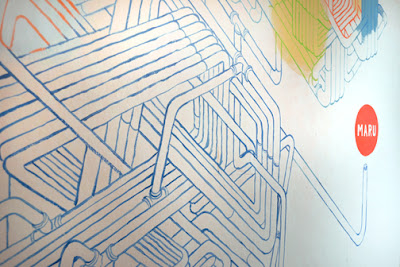 This is my homage to the internet - a series of tubes that always ends up at cat videos.
Posted by Andrew DeGraff at 2:57 PM No comments: 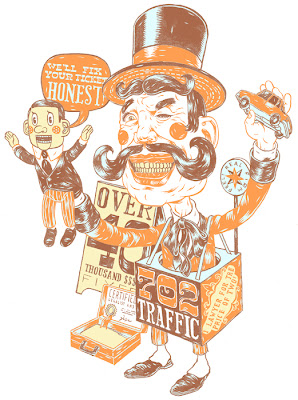 I had a blast doing this little piece for Maureen Adamo at Las Vegas CityLife about a skeevy ticket firm out there: multiple instance of fraud perpetrated by a non-lawyer running a law firm (which in itself is illegal.)  Reminded me of some kind of wild-west huckster from "Deadwood".
Posted by Andrew DeGraff at 3:51 PM No comments: